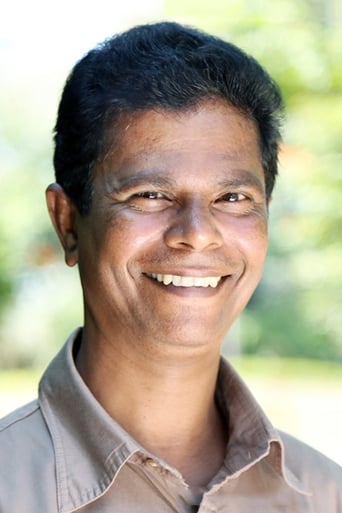 Indrans is a Malayalam film actor and costume designer, working mainly in comedy roles. He has appeared in over 250 films. Indrans, a tailor by profession, debuted in the film Choothattam both as a costume designer and as an actor. The producer, TMN Charley, offered him a chance to assist in costume designing. Although he had the opportunity to meet many filmmakers, including evergreen hero Prem Nazir, Sattar, Pappu, Jose Prakash and Jayabharathi, he concentrated on designing costumes for several years in the industry, acting in minor roles on screen. Soon, Indrans started getting cast by well-known directors including Padmarajan, Venu Nagavally, Shaji N. Karun, Sibi Malayil and K. Madhu. CID Unni Krishnan was a turning point in his career. His brand of comedy clicked among the audiences and he went on to become a popular comedian in Kerala, and has worked steadily as an actor. As a comedy actor he has made most use of his slender, lean figure and typical accent to win over the audiences. He created his own style in cinema. Renowned directors Adoor Gopalakrishnan and T.V. Chandran also offered him roles.