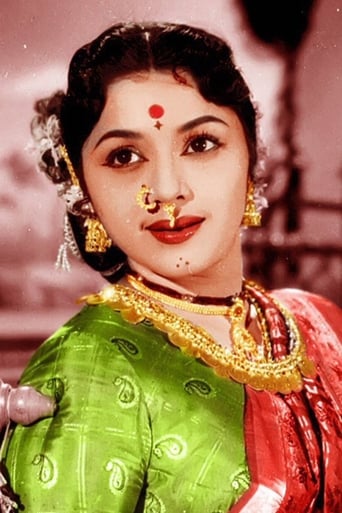 Padmini (12 June 1932 – 24 September 2006) was an Indian actress and trained Bharathanatyam dancer, who acted in over 250 Indian films. She acted in Tamil, Telugu, Malayalam and Hindi language films. Padmini, with her elder sister Lalitha and her younger sister Ragini, were called the "Travancore sisters". Padmini was born and raised in Thiruvananthapuram, in what was then the princely state of Travancore (now the Indian state of Kerala). She was the second daughter of Sree Thankappan Pillai and Saraswathi Amma, both coming from noble Nair families. Her sisters Lalitha and Ragini, were also well known film actresses. Together, the three were known as the Travancore sisters. Padmini and her sisters learnt Bharathanatyam from Thiruvidaimarudur Mahalingam Pillai. The trio were the disciples of Indian dancer Guru Gopinath. They learnt Kathakali and Kerala Natanam styles of dancing from him. N.S. Krishnan noticed her talents while she was presenting Parijatha Pushpapaharanam in Thiruvananthapuram. After that performance, he said that in the future she would become an actress. She was thus cast as heroine in his own production Manamagal. The Travancore Sisters grew up in a joint family tharavadu (Malaya Cottage) in Poojappura, Trivandrum. The matriarchial head of the family was Karthiyayini Amma, whose husband was P.K. Pillai (Palakunnathu Krishna Pillai of Cherthala) alias "Penang Padmanabha Pillai". P.K. Pillai had six sons, of whom Satyapalan Nair (Baby) was a leading producer of many early Malayalam films. They performed at the 1955 Filmfare Awards. Padmini was a leading actress and one of the highest paid actresses of the 50s, 60s and 70s. She is also known as one of the charming beauty queens of the 50s and 60s. She was given the title "Natya Peroli" in Tamil Nadu because of her excellent Bharatnatyam performances in Tamil films. Her Tamil movie Thillana Mohanambal, is a cult classic of Tamil cinema and continues to be remembered even today. Her beautiful performance in Jis Desh Mein Ganga Behti Hai was outstanding and made her a national star.