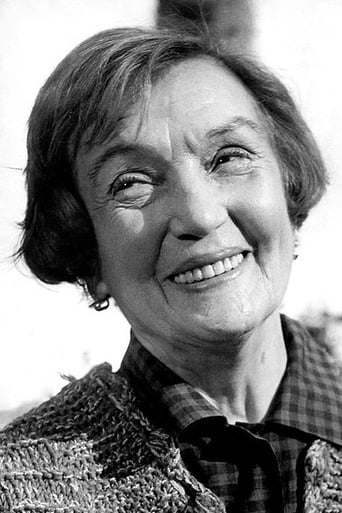 Marie Rosulkova (December 17, 1901 Pilsen - May 15, 1993 Prague) was a Czech actress. She has been playing in the theater since 19 to 91 years. As a bank clerk, she was privately trained by Marie Laudová-Hořicová. Since 1921 the theater has been professionally played in Pilsen, České Budějovice and in the Zemské divadlo (1931-1933) in Brno. From the beginning, she played rather roles of ladies and experienced women than young naiveks (Frank Wedekind: Lulu, Ceske Budejovice, 1924, roles and rolls in the head of the station, The Snack Shop and many others). She appeared in the ensemble Vlasta Buriana shortly, and in 1934-1949 she worked at the Vinohrady Theater, from 1950 to 1982 she stood on the boards of the Prague Municipal Theaters. She received a character role here, enriched by her tendency to a kind parody (Spanish Queen Maria Luisa, Frank Tetauer: Don Manuel and Marie Luisa). In 1960 he created the character of the Italian matron Filumena Marturano in the same comedy of Eduard De Filip. In her early years, her life role in the character of the eccentric, but above all, gentle and wise Toula Maude, the main character of the successful comedy of Harold and Maude (1976). She had the first film roles at the end of the 1930s, but the greatest popularity brought her in the 70's comedic role of grandmothers and eccentric older women. In such roles she has also taken on television. Her most famous role is her grandmother, the detective author in the series "Such a Normal Family". On February 25, 1948, he signed the call for Pro-Communist intelligence ahead, a step backwards supporting the Communist coup. In 1966, she was named a deserving artist. She is buried at the Vyšehrad Cemetery in a special department designed for nuns (the east side at the entrance). From Wikipedia, the free encyclopedia